A Process of an Engraving 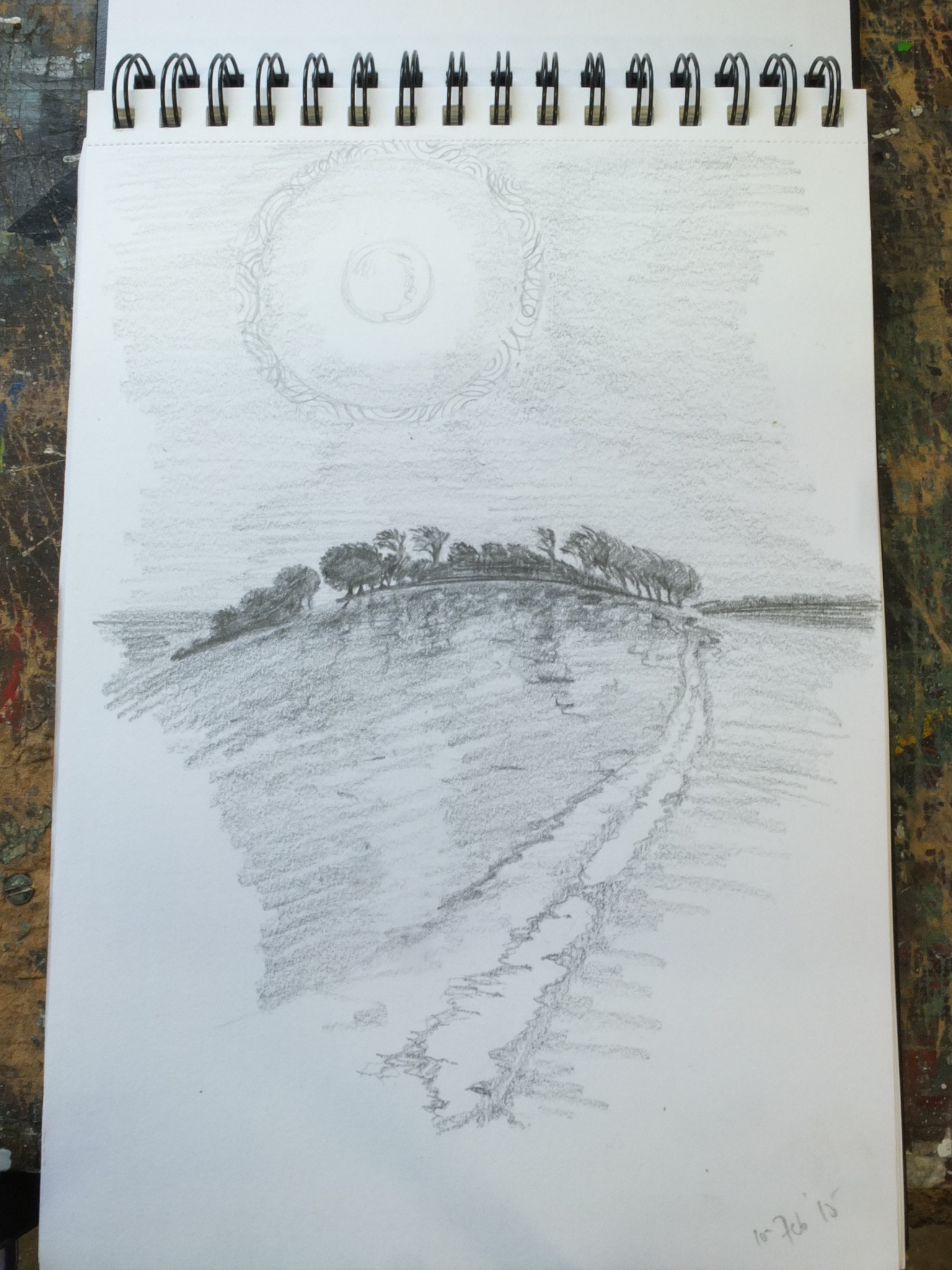 I've not done a blog focused on a wood engraving for a while, so I thought I'd share the process of this current one of Chanctonbury Ring.

I change my approach almost all the time, time constraints often impact and reflection on the style of my engraving are responsible for this constant shifting approach.

Here's a link through to a blogged process from a few years ago 'A Process of Engraving' The biggest change is I moved away from the gouache and pencil sketch on the block- I felt my engravings where becoming a bit to smooth and polished - I am constantly striving for a looser sketchier look to my engraving. And from a more technical point of view I found the sketch rubbed off to easily, so by the time the engraving was approaching the finish I was struggling to see the image.

For this blog I am going to include my sketch book process too - this engraving is a bit different - usually I see something which inspires a scene to engrave. This approach though limits my subject matter to the world I travel through - with this engraving I wanted to spread my wings a little further. I am very fond of Chantonbury Ring and wanted to capture it in an engraving (I'll write more about the Ring at a later date)- so I have made 5 visits to there over the last month- trying to find the view that would inspire the engraving. The sketches distilled from those visits are below. I really struggled to find the view that would work for me- a few false trails were started, but on reflection they didn't quite get there for me. 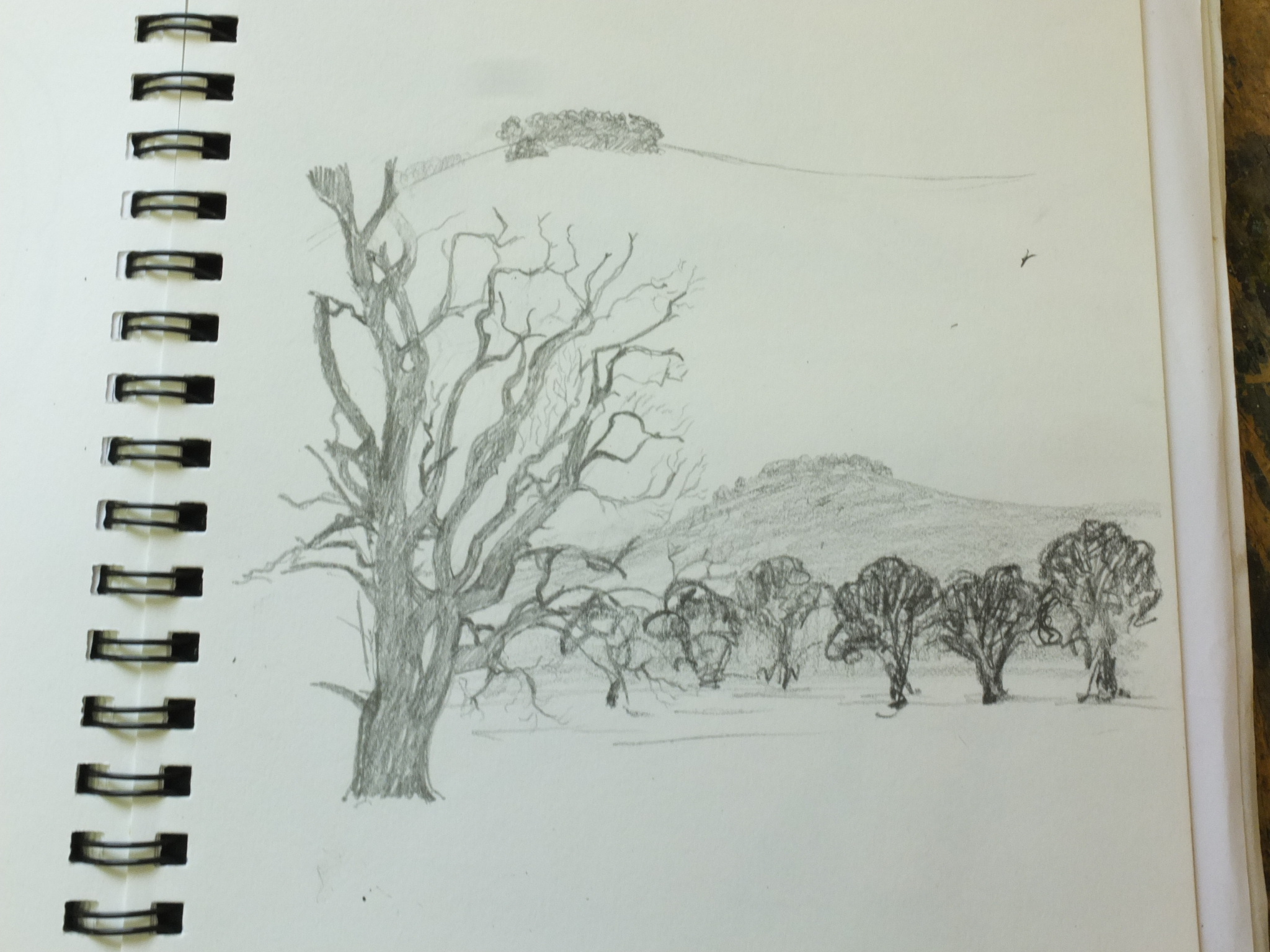 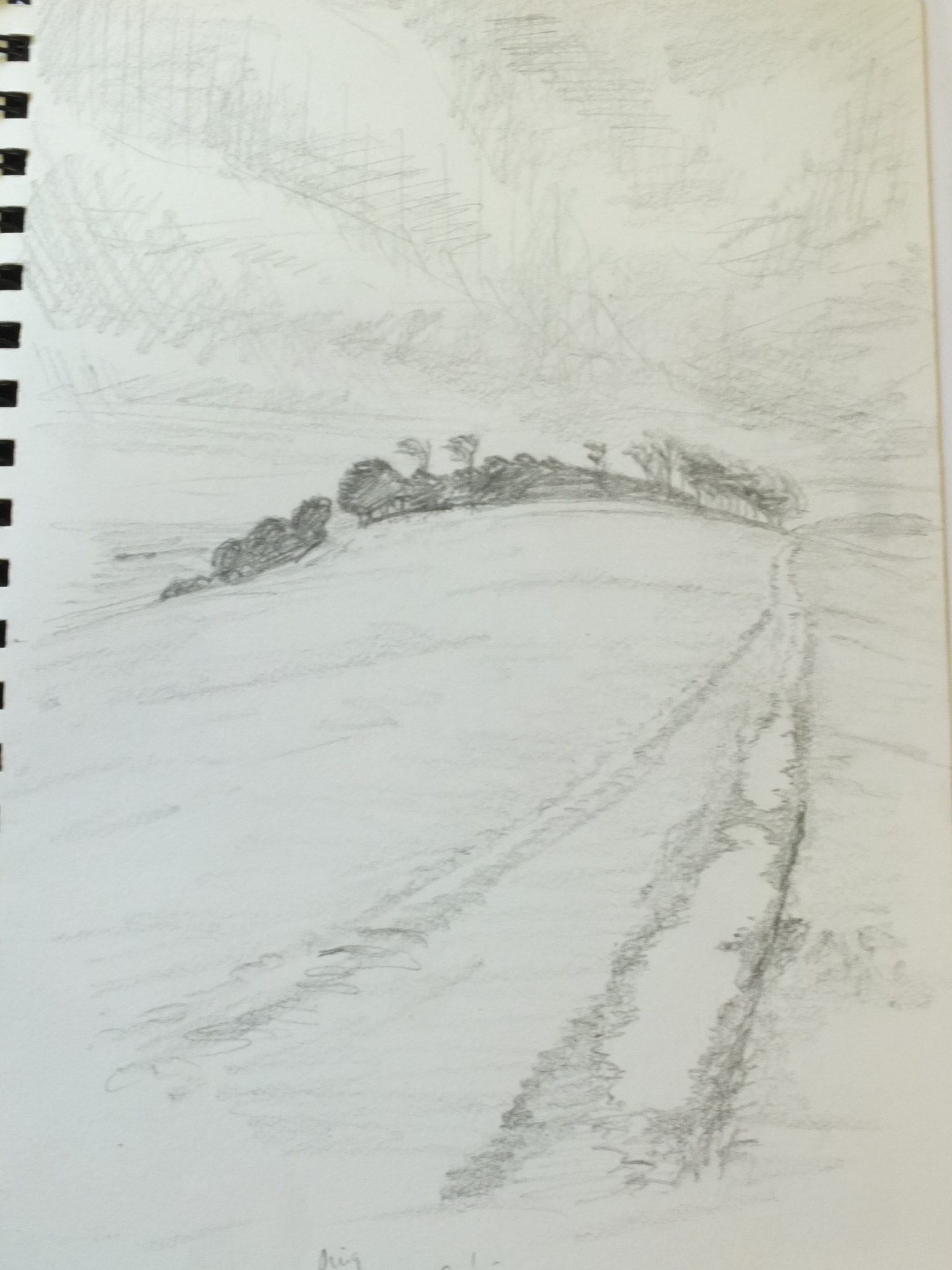 I thought this, a more classic angle might do- however I felt it needed a focul point - and at winter the area is so wind swept it is scrubbed quite clear......lots of bland ground, a bit boring to engrave! However i did think the puddles would be quite nice to work.

And then I thought I had a bit of a break through inspired by the late January full moon which had a beautiful ring around it as the moonlight refracted through ice cystals high in the atmosphere, Chantonbury Ring became a nigthtime view with more than one ring on show (sounds a bit rude!) a day or two later another visit to the site this time late in the evening with owls hooting and a very cold northerly cutting right through me I climbed to the Ring. On reflection the image still didn't quite get me there- although I now had an exciiting sky to play with- there is still the barren forground to content with. 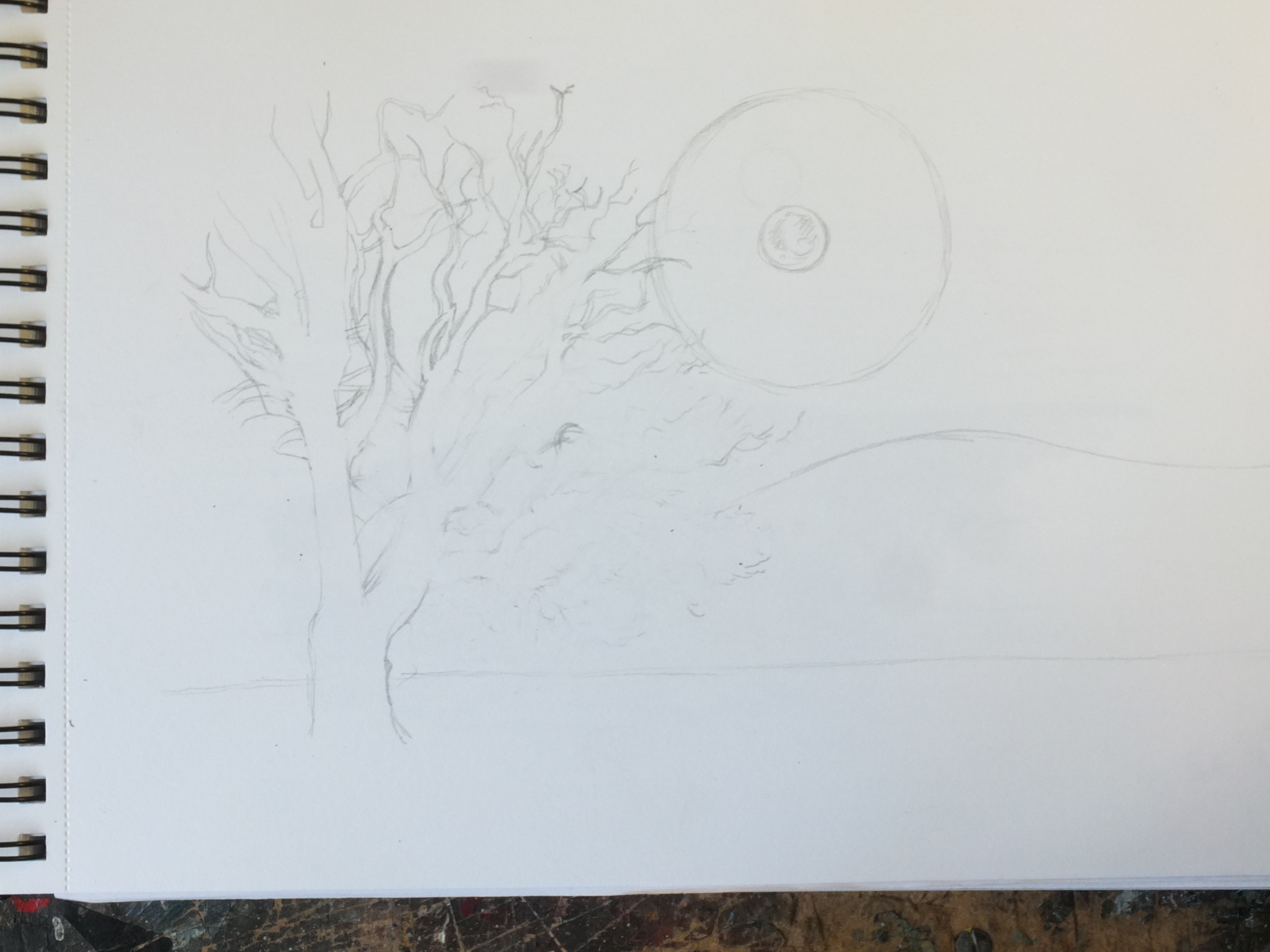 I wondered if a return to the earlier idea mught be the way. 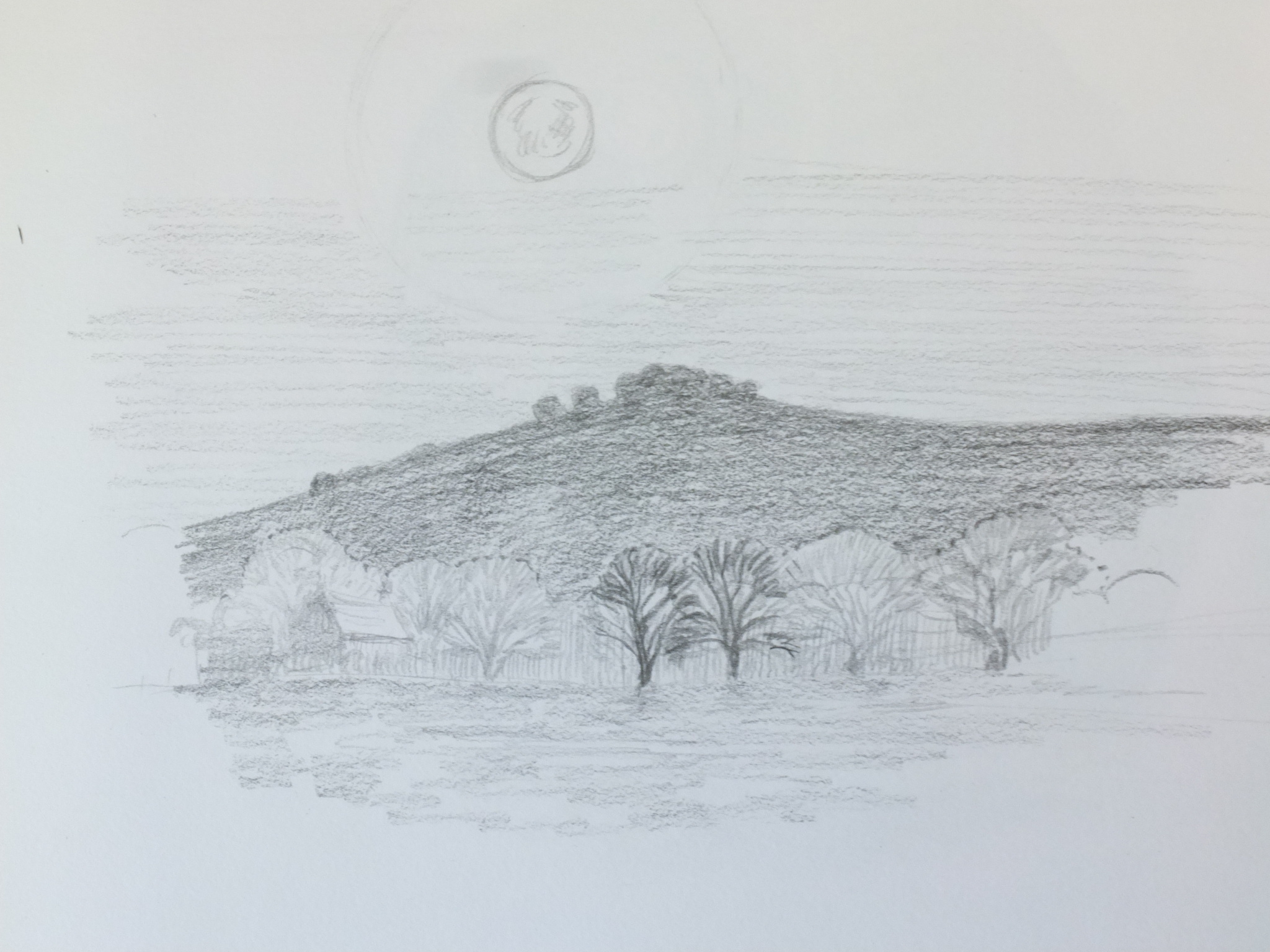 And than when I was doing this sketch with the cottage at Chancton Farm I though I had found the missing piece of the jigsaw - a cottage nestled at the foot of the Ring with a lone light burning in the window- some where cozy to retreat too on a winters night. 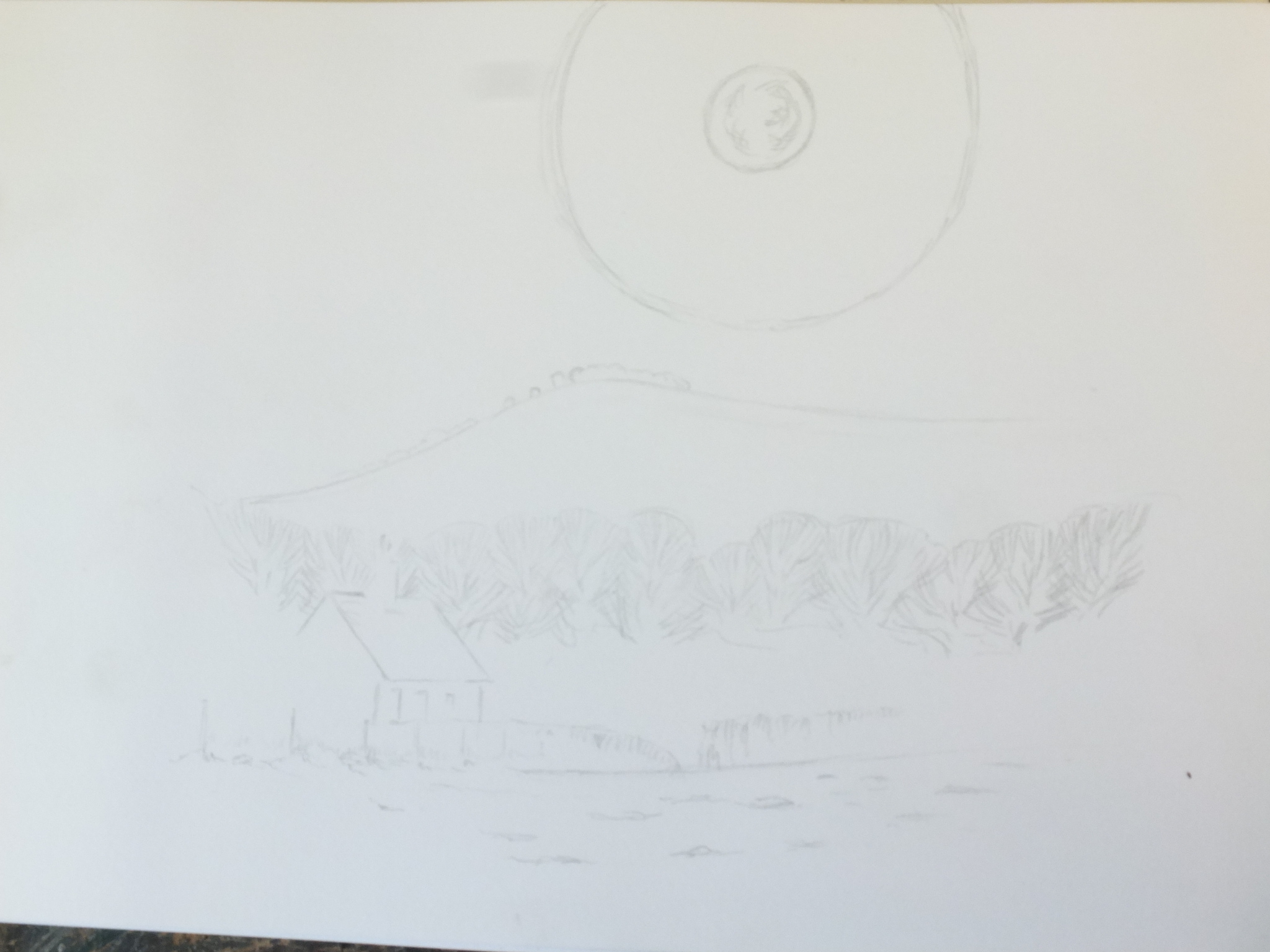 So a quick sketch- to adjust the composition. Most of my sketches are using photos as source- I do prefer, and would always recommend to sketch plein air - however I am so, so busy, time to sit and sketch is a very rare commodity indeed. I feel the life you do loose through not sketching directly from life is resuscitated by engraving from the prepoaratory sketches - rather than directly from photos - I may sometimes refrer back to photos for details, however the bulk of the engraving is done from sketches. The sketch above has almost totally moved away from photos already. 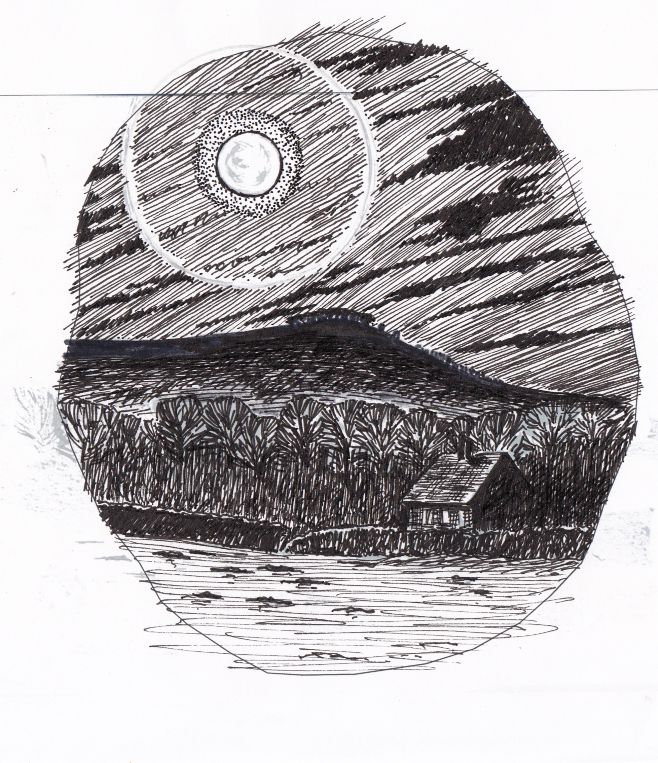 I scanned the last sketch, flipped it and put a white translucent layer on it and then over laid a tracing of the block I was intending to use over the image to get the final composition right. I then printed (digitally) the result and worked over that print with pen and ink- beggining to work out the cuts and engraving techniques I'll use to engrave the block. I then re scanned this image and resized it, printed it again at the correct size. The next job is to roughly trace this directly onto the block and then re-ink that image on the surfce of the block before the engraving is ready to start (all by tomorrow when I shall be starting this engraving at the Bankside Gallery as I am demonstrating at the Gallery as part of the Wood Engravers Annual show (More Here)

I'll keep updating this entry with progress on the block.

And here's the block drawn up and ready to start. 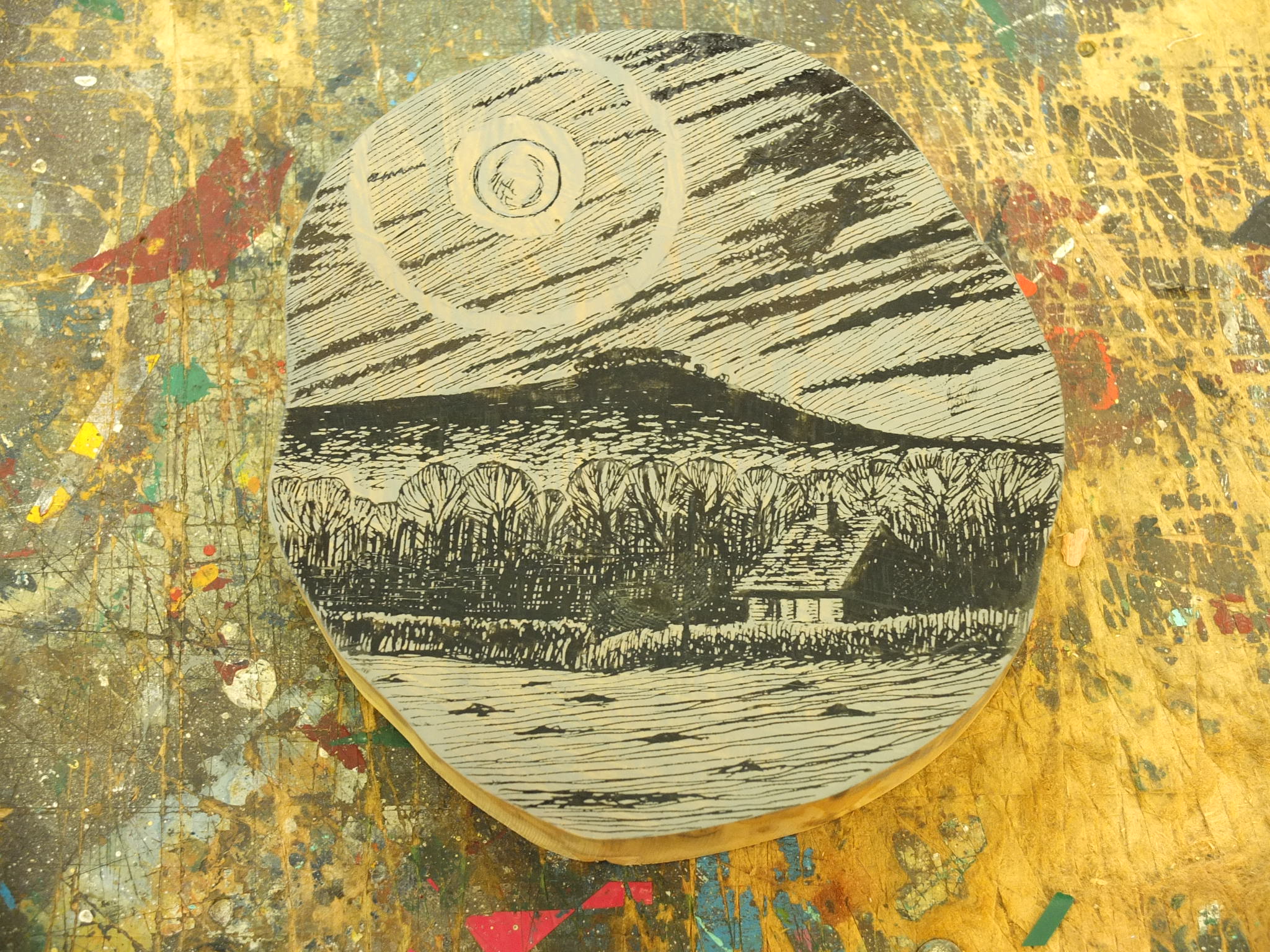 I had an amazing time at the Bankside Gallery, it was such a busy day. So many people stopped and chatted and I did promise to update this blog!

Here's the block after the day in London, as I said it was very busy so I didn't get too much done! 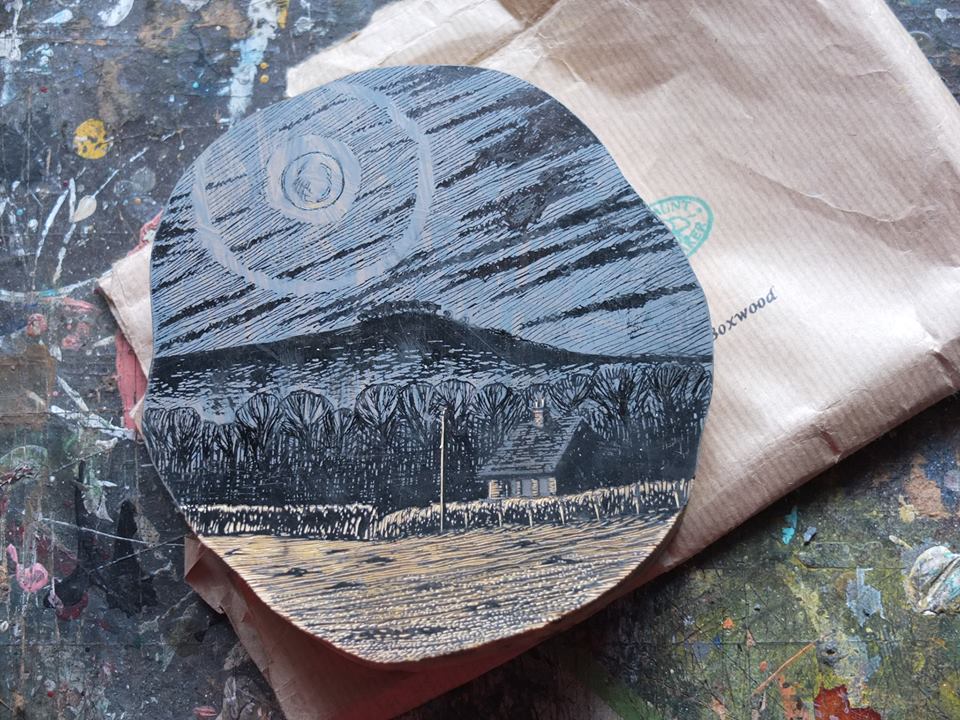 I think I've managed another couple of evenings on it since (I've been very busy with a sculptural commission, and have been a bit wiped out come the evening -more on that here 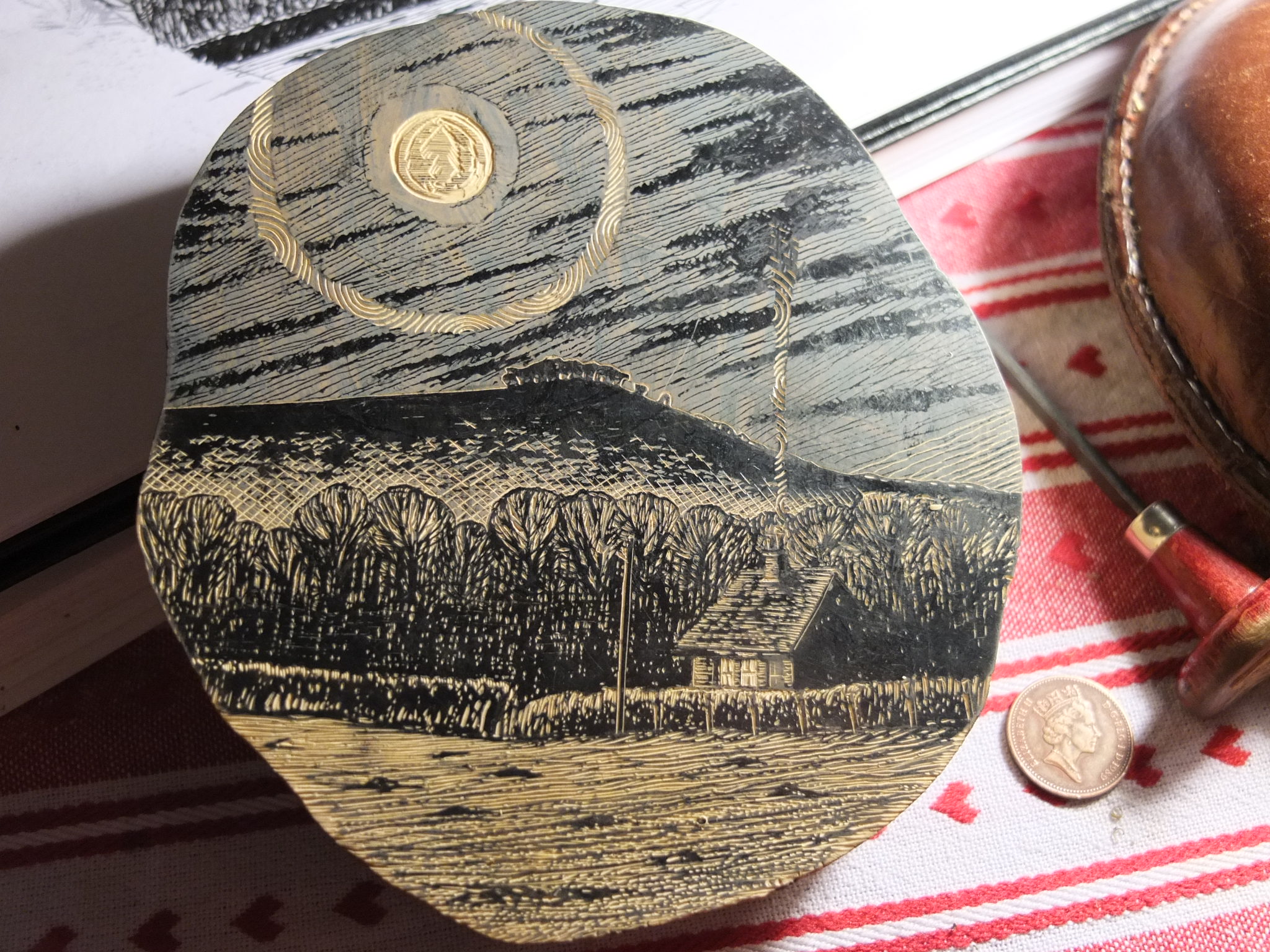 so here it is progressing nicely- I've got a quiet night in tonight, so I'm going to finish updated this blog and then onto a bit more engraving. 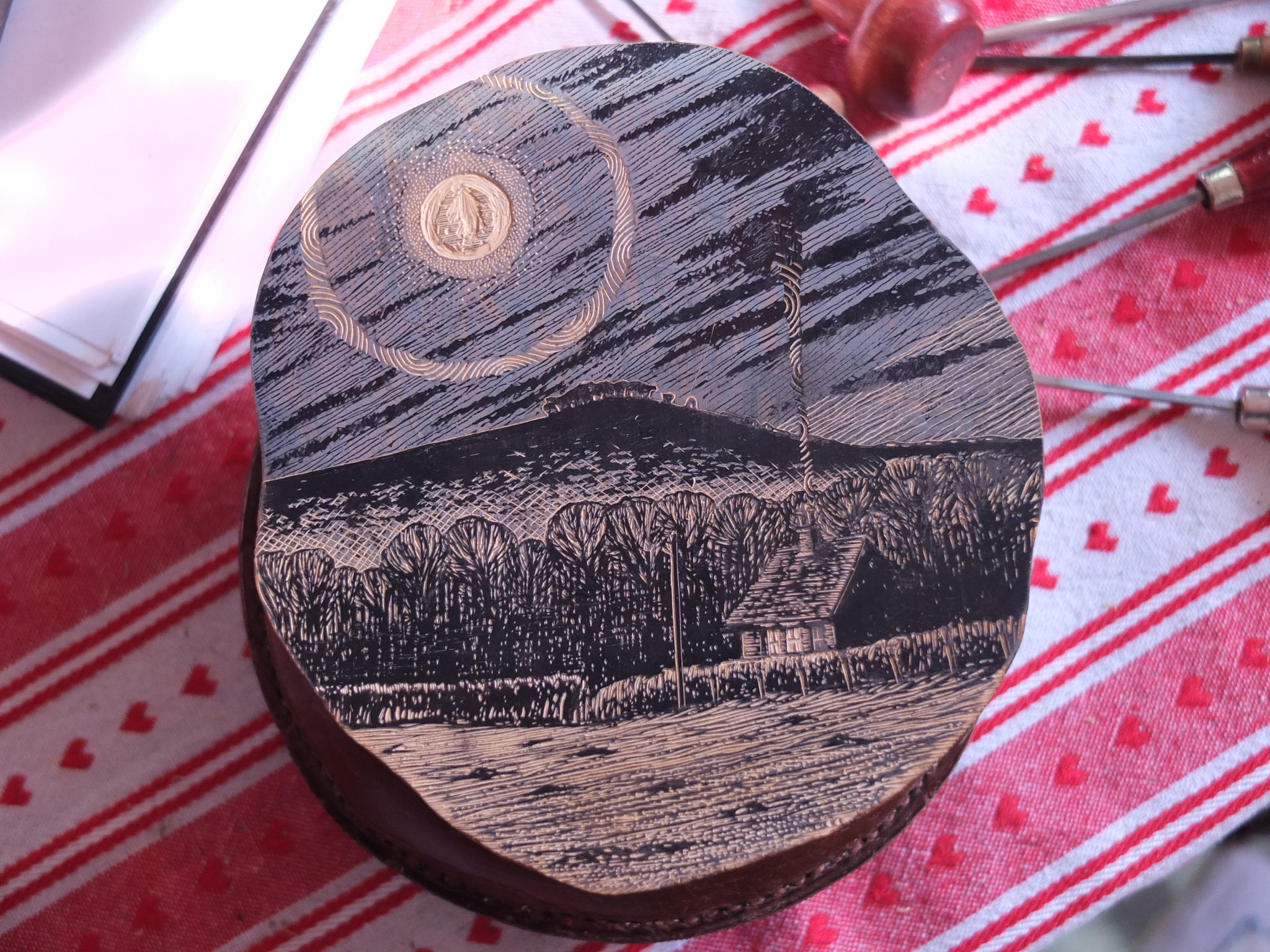 I guess I did about an hour or two on this last night. Finished the moon, added the glow and started to work the half tone into the veil of clouds. Wintry scenes like this are becoming a distant memory now with the signs of spring beginning to burst from every quarter! Need to get this done now so I can start a spring view!

Finally had a bit of time to sit and engrave last night, And the engravig is almost there- just a few more small deatils to add 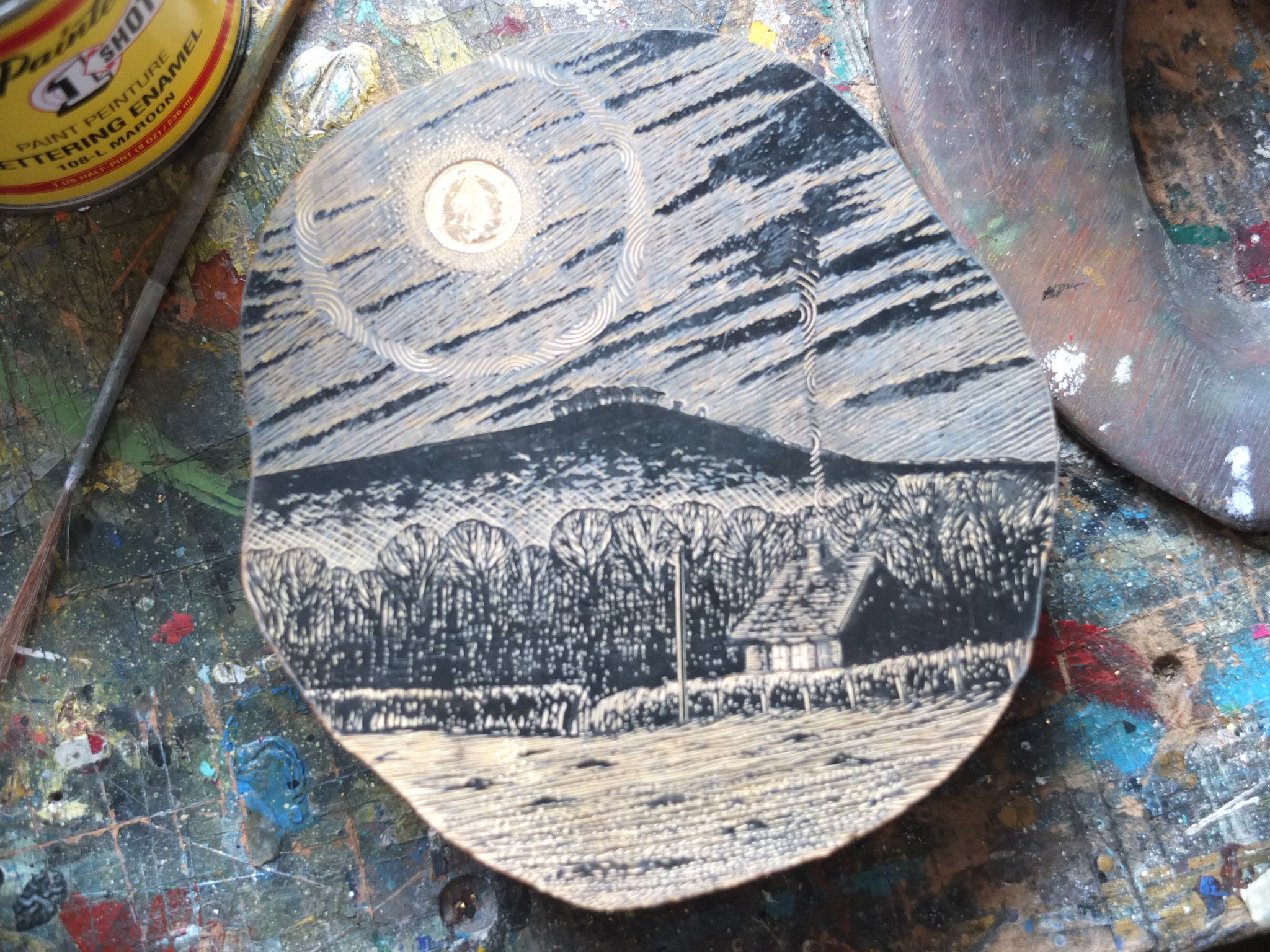 I think I've finished - there will undoubtably be a bit of tidying up to do once I've taken a proof print- I'll share the prints as soon, I really need to find some time to do some printing, I've got a growing back log.

Once printed it will be available on my WEB SHOP first. 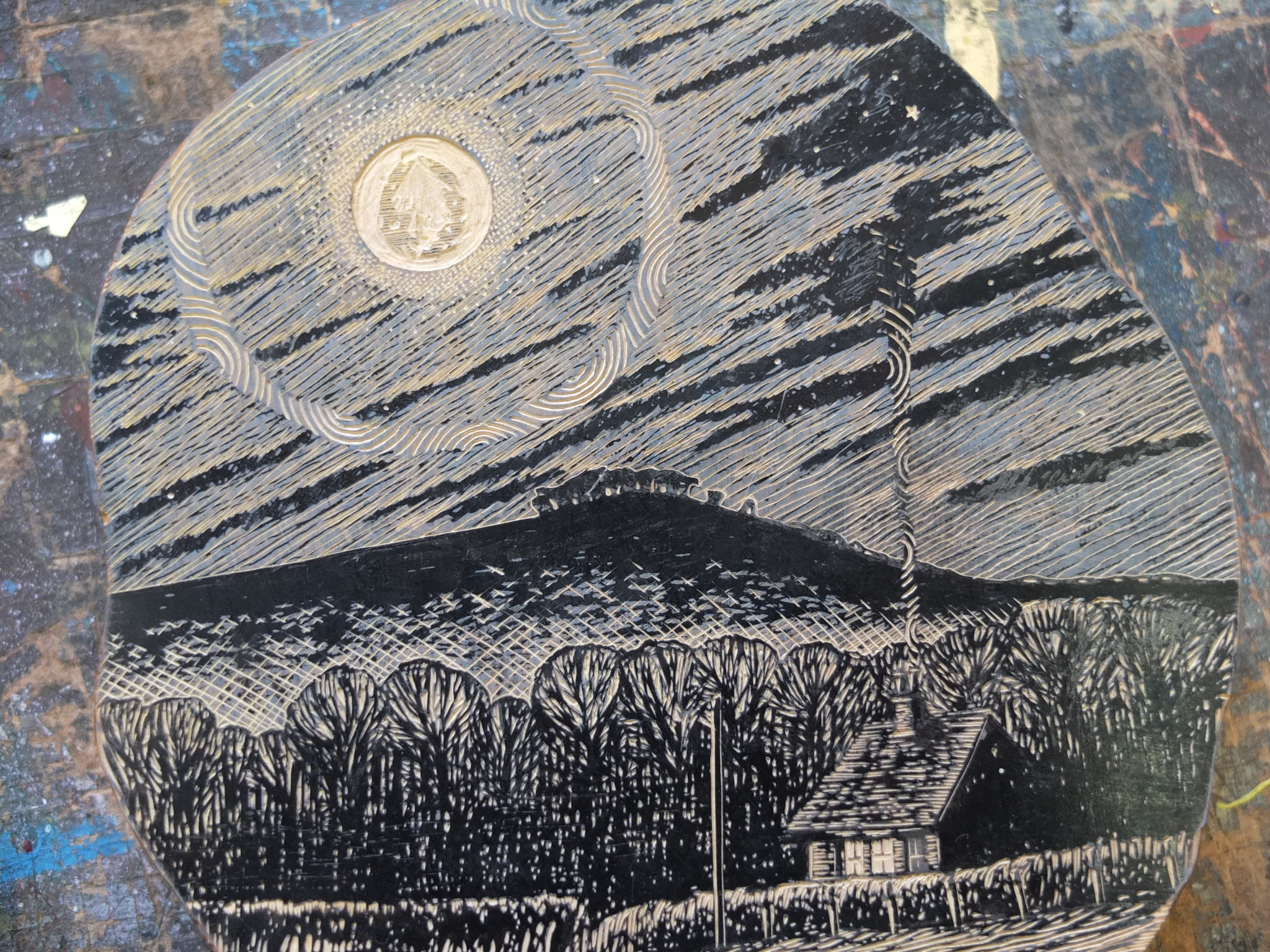